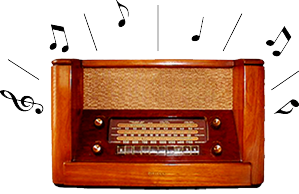 NBC, Nashville , Tennessee
Prince Albert Show, Grand Ole Opry, introduced by George D. Hay, December 23, 1939
- "When It's Time For The Whippoorwill To Sing"
- "What Would You Give In Exchange"
- "Weary Lonesome Blues"
You can listen to them in the:
Country Music Hall of Fame & Museum Archives

WLW, Boone County Jamboree, June 11, 1943
- "Woke Up This Morning Feeling Blue"
You can listen to it in the: Country Music Hall of Fame & Museum Archives, but very bad sound

TEXAS SAFETY COUNCIL, circa 1949
With the Frontiersmen ("Highpockets" Busse: accordion, Hal Clark: guitar, Wayne West: bass)
- "Back to Old Smokey Mountain"
- "Blues Stay Away from Me"
- "I Swear by the Stars"
- "Going Back to Texas"
You can listen to them in the: Country Music Hall of Fame & Museum Archives

XERB, Rosarita Beach, California, 1949-1950
Probably part or all of the XERB Transcriptions were recorded at radio station KWHN, Fort Smith, Arkansas during the year of 1949 and were shipped to the USA/Mexico border stations for broadcast in 1949 and 1950.

At least 45 shows of 15 minutes. Titles included:
"He Set Me Free", "Gathering Flowers for the Master's Bouquet", "The Book of Revelation", "Keep on the Sunny Side", "If We Never Meet Again", "My Last Moving Day", "Show Me the Way", "Oh, How I Love Jesus", "Hallelujah Morning", "Remember Me", "I'll Be Satisfied", "The Old Country Church", "Just a Closer Walk with Thee", "Glory Is Coming", "Camping in Caanans Land", "That Old Time Preacher Man", "Did You Ever Go Sailing", "Give Them the Roses Now", "What Would You Give in Exchange", "The Last Mile of the Way", "Drifting Too Far from the Shore", "When God Dips His Love in My Heart", "Beautiful Home", "I Need the Prayers of Those I Love", "Gathering in the Sky", "I Want to Be Ready to Meet Him", "Looking This Way", "The Lifeboat", "God Put a Rainbow in the Clouds", "Just Over in the Glory Land", "Nobody Answered Me", "Watching You", "Turn Your Radio on", "Old Camp Meeting", "Where the Soul Never Dies", "The Old Gospel Ship", "Precious Memories", "I'll Be Somewhere Listening", "I'd Like to Go Back", "That Wonderful Day", "Work for Night Is Coming", "In Sweet Bye and Bye", "The Wrath of God", "I'll Meet You By the River", "How Beautiful Heaven Must Be", "Calling to That Other Shore", "What Shall I Do with Jesus", "A Beautiful Life", "Precious Lord, Take My Hand", "From Jerusalem to Jericho", "Who At My Door Is Standing"
More unidentified. Complete list of songs needed.

XELO, Ciudad Juárez, Chihuahua, Mexico. Hank Thompson Radio Show, March-April 1950
With The Brazos Valley Boys (Wade Wood: fiddle, Lefty Nason: steel guitar, Billy Stewart: bass)
- "Blues Stay Away from Me"
You can listen to it in the: Country Music Hall of Fame & Museum Archives
Two versions are indicated, but these are exactly the same!

Other titles of the Delmores, as well as a title of the Brown Ferry Four, appear in the archives of the Country Music Hall of Fame & Museum, but alas with a very bad and not restorable sound. 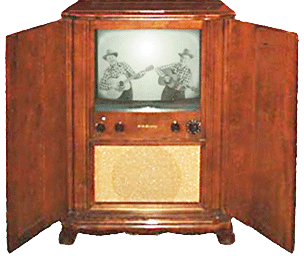 Any addition or correction welcome. Your name quoted.